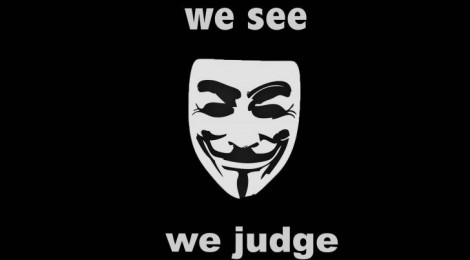 In October, I wrote an article about Amanda Todd, a Canadian teen who was so severely cyber-bullied that she committed suicide. Now, in a strange turn of events, I am being threatened in her name.

Someone claiming to be from the hacker group “Anonymous” sent an email recently, demanding I remove images created by Todd’s bullies from the piece. My intention in using these images was to condemn bullying by showing the horrors Todd experienced, so you can imagine my surprise on Sunday when I received this:

You say this is disgusting, yet you publish the pictures…  Are you fucking stupid. Carol, the mother is requesting you remove them.

I will be checking back in 7 days to see if you have updated the article.  You fucking moron.

EXPECT US…
–
This mail is sent via contact form on Fake Pretty http://fakepretty.com

Whether or not this person is a hacker, and whether or not I should be “expecting” Anonymous on my site, outside my home, or for dinner is unclear. Seven days have passed, and though I feel safer now than I did yesterday, I still have no idea what to expect. However, regardless of the legitimacy of this threat, the email raises a number of ethical questions.

Am I being bullied by this alleged Anonymous, or am I the bully?

In the days since receiving it, this email has been pretty much all I think about. I have contacted my web host and searched the Twitterverse, trying to uncover my harasser to no avail. I have scoured the Internet for related hashtags and learned more about #Anonymous than intended, as I sit here contemplating my decision and its potential outcomes.

While I feel the use of images portraying the horrors of cyber-bullying is legitimate in the context of critical discussion, am I contributing to the problem by displaying them? Since Todd herself spoke out so publicly against her bullies through the YouTube video she made shortly before she hung herself, I imagine she would have wanted the discussion surrounding bullying and the Internet to continue, and discussion includes documentation.

I’m reminded of a recent article published in the Jewish Daily Forward in which a journalist writes of her hesitation to print graphic quotes from Veronique Pozner, a mother who chose to view the body of her son Noah, a student murdered at Sandy Hook elementary school. She told the reporter:

“He looked like he was sleeping. But the reality of it was under the cloth he had covering his mouth there was no mouth left. His jaw was blown away. I just want people to know the ugliness of it so we don’t talk about it abstractly, like these little angels just went to heaven. No. They were butchered. They were brutalized. And that is what haunts me at night.”

Pozner had nothing to gain by describing her son’s corpse; his murderer was already dead. She wanted only to shed light on the issue of gun violence.

The mother of Emmett Till, a 14-year-old black boy who was beaten and shot to death in a racially based attack, changed history in 1955 when she decided to hold an open casket funeral for him and allow photographs of his body.

“There was just no way I could describe what was in that box … No way. And I just wanted the world to see,” she said at the time.

But I am not Amanda Todd’s mother, and since the images are part of a vicious meme that contributed to her death, one might say they are not the aftermath of a tragedy, but its manifestation. One friend of mine said that if Todd’s mother was behind the email, I had better take the images down. Another suggested fear-based capitulation and silence. A third person argued that repeating the meme in any form was lending it credence and that I was dumb not to see the hacker’s point.

A meme is like an echo. It’s a game of telephone. A meme births its own annihilation, as repetition and alteration gives way to meaninglessness and it becomes nothing more than a guttural sound, a blip, a sputter. A meme is what you make of it.

So, rather than removing the images, I decided to alter them.

On the Internet, where an image presented may be easily and instantly removed from its context and replicated endlessly, presenting it unaltered may be akin to presenting it without commentary at all. However, altering an image is hardly standard journalistic practice; journalism seeks to be objective and truthful. Journalists fight so that images will not be suppressed. But the memes that haunted Amanda Todd are part of a bigger story and alteration has now hopefully become part of its unfolding.

From a psychological perspective, the most insensitive memes might be viewed as ways in which society reclaims a tragic event and re-write it as comedy. Certain things are so tragic or violent that they defy explanation and all we can do is laugh to keep from crying. But all the theory and comedic nuance in the world doesn’t do much to help a bullied child, just like discussion of the email threat I received doesn’t make it any less disturbing. Showing the email to friends and colleagues and writing this article has in many ways made the threat more alive and present. It lives inside my head perhaps in the same way Todd’s tormentors lived inside hers, and like Todd, I am seeking solace and support online—the place where all my trouble began in the first place.

Ironically, if anyone believes that perpetrators of hate and bullying should be outed and their ways exposed, it would seem to be Anonymous. The entity was recently credited with releasing shocking footage in the Steubenville Ohio sex crime case. In the video, a college student is deriding and mocking the girl at the center of the case who, after drinking and becoming unconscious, was carried around to various football parties and sexually abused.

While my goal in using images created by Amanda Todd’s bullies (and my goal in writing this article) is not to allow the public to locate the bullies and exact retribution, like those who released the Steubenville video, I aim to shed light on a cruel situation. Both the images I used and the Steubenville video show the power of the Internet to inflict psychic pain in an instant. In the Steubenville sex crime case, tweets and images of the victim were posted on Twitter before she was even conscious to see them.

While it would be a better world if the Internet was purged of cyber-bullying, the people who should be held accountable are those responsible for it, not the journalists who report on its existence. Though it might be argued that sites that shed light on cyber-bullies also benefit from them in some way, since they create a fraction of our content, that is the same as saying the New York Times benefits directly from bombings and war– while possibly true, it borders on ridiculous.

Obviously Amanda Todd’s death is first and foremost a tragedy, not a lesson, but if I allow the horrors she experienced (contained in the images I published) to be forgotten or whitewashed by the Internet’s self-cleaning mechanism of deletion and new traffic flow, am I really helping? Further, if I adhere completely to my blackmailer’s demands, am I participating in censorship and fear-based limits on free speech?

In receiving my “Anonymous” email I was forced to come to terms with the dangers of the Internet. Late at night, I received a phone call from a 000000000 number. There was no message, but was it them? My site got shut down briefly last week and I was up panicking, was it them? I am experiencing a certain type of paranoia that only the Internet can engender, where every glitch has a meaning, where I both anticipate and fear being known. As if Facebook could suddenly look back at me and see me at home in my underwear. As if I will suddenly be unmasked and targeted specifically in a public space.

Like many Internet denizens, members of Anonymous pride themselves on lurking in the shadows. They don masks in public, in an act that conveys both fear and power: they are unknown so they are frightening, but they are masked so they must be afraid too. They are at once a product of the Internet and of our collective imagination, representing all the invisible justice and terror lurking out there in the world.

While many of the actions of Anonymous seem noble, if this is indeed an act on its behalf, it is far from noble. If it is not an affiliated act and rather a perversion of its goals, it shows how easy it is to pretend and frighten just with a simple email. I am reminded of how terrified Amanda Todd must have felt when she found out she had an Internet stalker: someone unknown, lurking in the shadows who, in many ways, we should all be “expecting.”

This email threat is in and of itself a good argument for enhanced Internet policing, which is, oddly, what this alleged Anonymous member wants for our site. However, the entity Anonymous seems to be against censorship, based upon its love of hacking and incredible use of free speech. It is therefore odd that someone would claim to be part of Anonymous in order to threaten a website that is ostensibly on its side.

Perhaps all this means is that when vigilante justice is exacted, it can turn into just as narrow-minded a regime as it sought to overthrow. Perhaps this means that one individual decided to do something impulsive and it shouldn’t be taken seriously, but more likely it means that in order to have real discussions online, we must all become more technologically sophisticated. We must think critically about the ways in which the Internet is different from the printed page and learn how to play with its strengths and weaknesses: “the medium is the message.” We must try to understand the consequences of our online actions, regardless of our intentions and must gain the technical skills to level the playing field to fight back against those seeking to limit free discourse, whoever they may be. In the words of Josh Kopstein and protesters everywhere: It is no longer OK not to know how the Internet works. 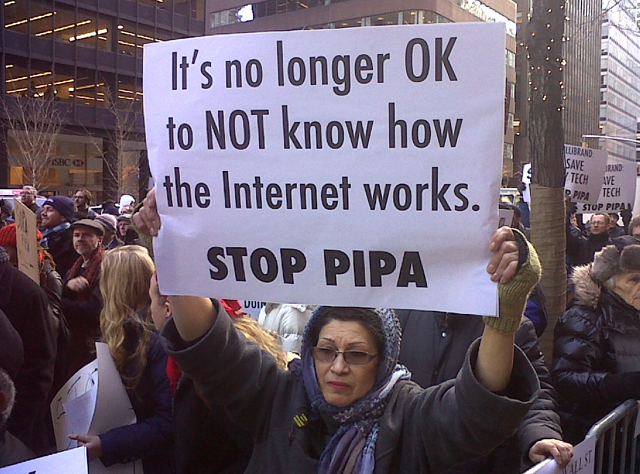 This article first appear on Alternet