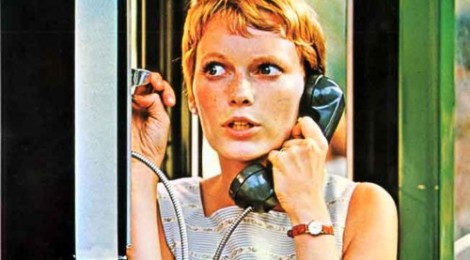 Rosemary Woodhouse has ulcers, or some mysterious, insufferable pain that made her emaciated and look like a ghost. She ends up giving birth to Satan’s son. Why is it that when a woman is pregnant in a movie she is somehow equated to a monster? Like Charlotte Gainsbourg in Lars von Trier’s Antichrist. She was so sado-masochistic and witchy that it turns out she actually wanted her son to die. Look at the way that she put his shoes on him. She put a left shoe on his right foot and a right shoe on his left foot. She was torturing him the whole time! Rosemary ends up being “okay” with the fact that she gave birth to the devil’s son. Maternal love is totally fucked up that way.

It seems like it’s more about the way men think about women thinking about themselves. Think about all the those big male directors who make big movies about women falling into madness by way of “becoming” another woman: Ingmar Bergman’s Persona, Brian De Palma’s Sisters, Robert Altman’s 3 Women, David Lynch’s Muholland Drive, and Darren Aronofsky’s Black Swan. Of course all of these women are thin, sultry, Hollywood beautiful, and can’t really “become” one another without there being some form of lesbian sex scene.

In Persona, Bibi Andersson speaks of an explicit sexual encounter while sunbathing nude on a beach with a girlfriend and two boys. Mila Kunis fucks Natalie Portman in her fluffy, pink bedroom like a naughty schoolgirl.

‘Beauty’ pulls the wool over everyone’s eyes. So does sexiness. A beautiful, sexy woman can never become an “ugly” woman. Madness only befalls those who are beautiful and fashion forward. 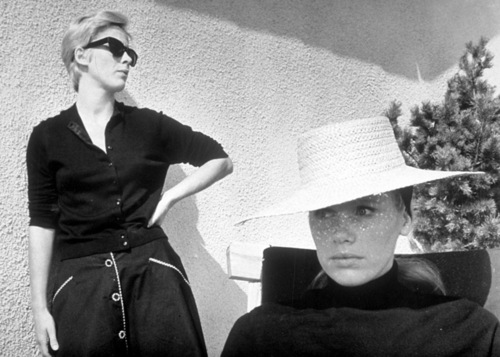 Rosemary wears the greatest outfits. Short sundresses with floral prints. She covers the house with new floral wallpaper; soon her dreams are projected on it. In one of her dream sequences, a group of women lounge on a boat while wearing floral bikinis.

Robert Altman said that the idea for 3 Women came to him from a dream.

Rosemary cuts her hair short and becomes ghostly pale. She rejects the feminine norm since short boy-like hair is not as sexy as long hair. Her husband (John Cassavetes) tells her that cutting her hair is the biggest mistake she ever made. He is such a dope in the movie. All the men in these movies act all knowingly about what the woman wants, or what’s “good” for them.

Willem Dafoe plays Gainsbourg’s husband and psychiatrist. He will mend her wounds and bring back the normal woman inside.

Rosemary is most frightened when she is by herself, trapped with her self and the baby. Like when she is the telephone booth waiting for the phone to ring. Her and her baby alone in a tall, glass box. Everyone around her wants the baby inside that is making her sick and skinny. Not sexy skinny, but hollow. What is Rosemary’s baby, but all the female norms and expectations rolled into one enormous ball in her stomach? One enormous ulcer. What cures stomach pains but throwing up what’s inside?

In Brian De Palma’s Sisters Danielle lays in an angelic white gown on the bathroom floor. She writhes in pain, clutching her stomach. A floral cake is decorated in oozing pink icing. She becomes Dominique.

Rosemary catches sight of herself on the side of a toaster. Her spidery fingers holding the bloody congealed insides of a dead bird up to her mouth. Horrified, she rushes to throw it up in the kitchen sink.

Walter Klemmer straddles Erika Kohut (Isabelle Huppert) in Michael Haneke’s The Piano Teacher. He shoves his huge cock down her throat. She throws up on the floor. What is inside that needs to come out?

I used to not eat in front of anyone. I thought it looked unattractive. After eating in solitude, I would purge in solitude. I would even try to purge after not eating. Only acids rising up my body. I was throwing up my insides. My best friend in high school said to me that I if I ever got pregnant I would throw up my baby.

I remember Natalie Portman throwing up in the bathroom stalls in Black Swan. I imagine her throwing up a swan and then fucking it.

When you watch a movie, you feel a false sense of privacy and intimacy. You think it’s your baby, your secret, your sexy disclosure…

I see Rosemary lying in bed all by herself. I see her the way I want to see her. She is mine.

**All italicized lines are from Masha Tupitsyn’s Beauty Talk and Monsters (Semiotexte, 2007)

More of Christine Shan Shan Hou’s writing and art can be found on her blog, “Hypothetical Arrangements“