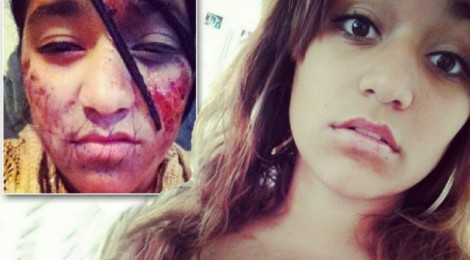 We were saddened to learn of the suicide of 15-year-old Felicia Garcia. The New York City teenager reportedly killed herself by jumping in front of a train after being sexually harassed and tormented by classmates.

Just weeks after the suicide of Canadian teen Amanda Todd, Garcia’s death exemplifies a disturbing trend not only in suicide of young girls, but in subsequent media coverage. Both the New York Post and the Daily News claim Garcia had sex with four members of the football team, but do not cite their sources. For such a claim, a bit more than “police sources” is warranted. The New York Post claims Garcia had sex with “four men at once,” they too neglected to include specific sources. They are now reporting Garcia engaged in “an orgy” that was videotaped, according to unnamed sources. Not only is Garcia dead, she is the only one whose identity has been revealed, making the reported sex act all about her participation in it, rather than the subsequent actions of those who may have bullied her to death.

FYI high school boys, if you find a girl who is down with sleeping with even ONE of you, she should be worshiped, not ridiculed. The New York Post described Garcia’s death thusly:

A Tottenville High School student jumped in front of a train after she was bullied for having sex with four football players at the same time during a party after a game this weekend, sources said. [NY Post Lede]

Using the phrase: “bullied for” implies that there was a reason Garcia was bullied, as if she did something wrong. While sleeping with four football players might not be everyone’s cup of tea, there is nothing inherrently “wrong” with it. Surely the football players didn’t think anything was wrong with it at the time. The only newspaper that has done anything close to decent coverage of Garcia’s tragic demise is Staten Island Live, reporting that police are investigating the possibility of a sex tape.

As with the Amanda Todd case, Garcia is being mocked and shamed in death in a manner that is both cruel and indicative of what she may have endured while she was alive: 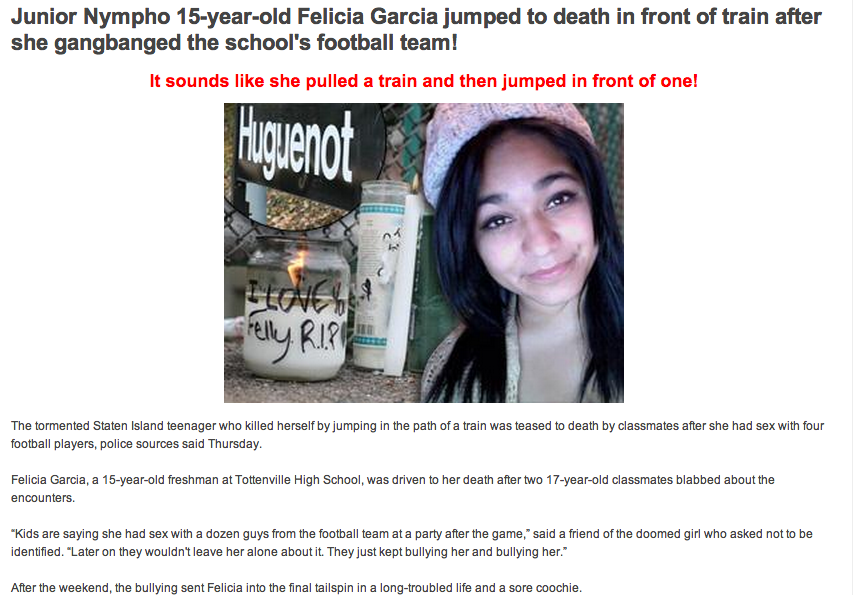 A screen shot from http://truenewsusa.blogspot.com/2012/10/junior-nympho-15-year-old-felicia.html

While Garcia’s suicide is tragic, and while teens bullying other teens should not be tolerated, what is more upsetting is that adult members of the media are covering this story in a way that perpetuates the idea that female promiscuity is something warranting shame, attack or humiliation. The “she was asking for it” mentality that condones mistreatment of certain women for their perceived lack of values or morals is alive and well in American culture and it needs to be stopped.