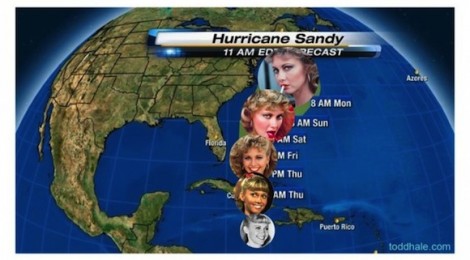 Dearest readers, we interrupt our regularly scheduled program to bring you some distressing news: here in Fake Pretty’s hometown of New York City, we have experienced a disaster of unprecedented proportions. We say “unprecedented,” and by that we don’t mean ‘oh I just moved to New York and I have no idea what I am talking about but it looks bad.’ We mean that after 28 years of living in New York, seeing two tornadoes tear through the city recently, missing school during the blizzard of 96, and shoveling out driveways covered with more snow than is humanly possible to comprehend during our ‘state of emergency’ two years ago, this is WORSE.

The storm is so bad that our Mayor, Michael Bloomberg endorsed President Obama citing climate change as the primary reason.

While there are so many wonderful things we want to tell you about, it would be remiss—nay—-callous— not to mention the disaster that has recently befallen our hometown.

We would like to share some photos of the Rockaways, an area that has been particularly hard hit by hurricane Sandy. 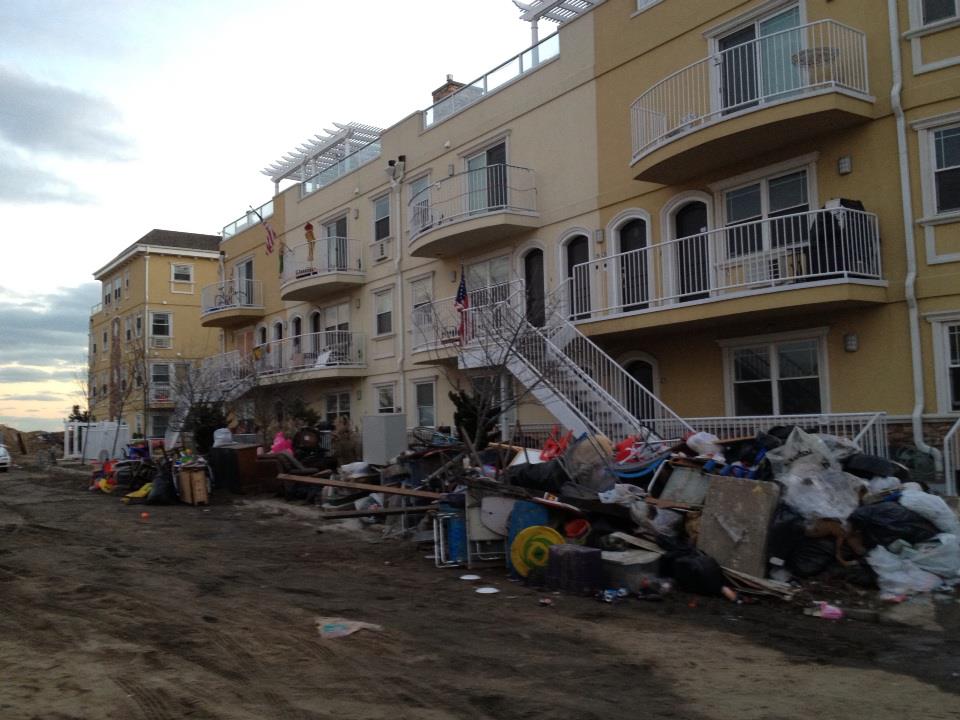 Street in the Rockaways after Hurricane Sandy. Photos by Elizabeth Daley. 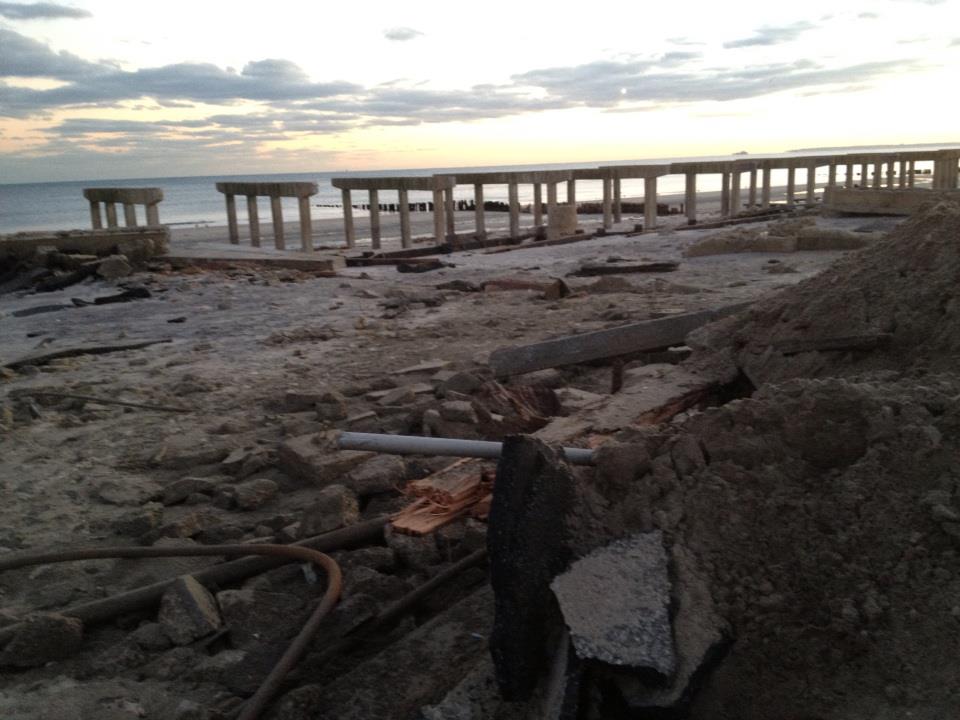 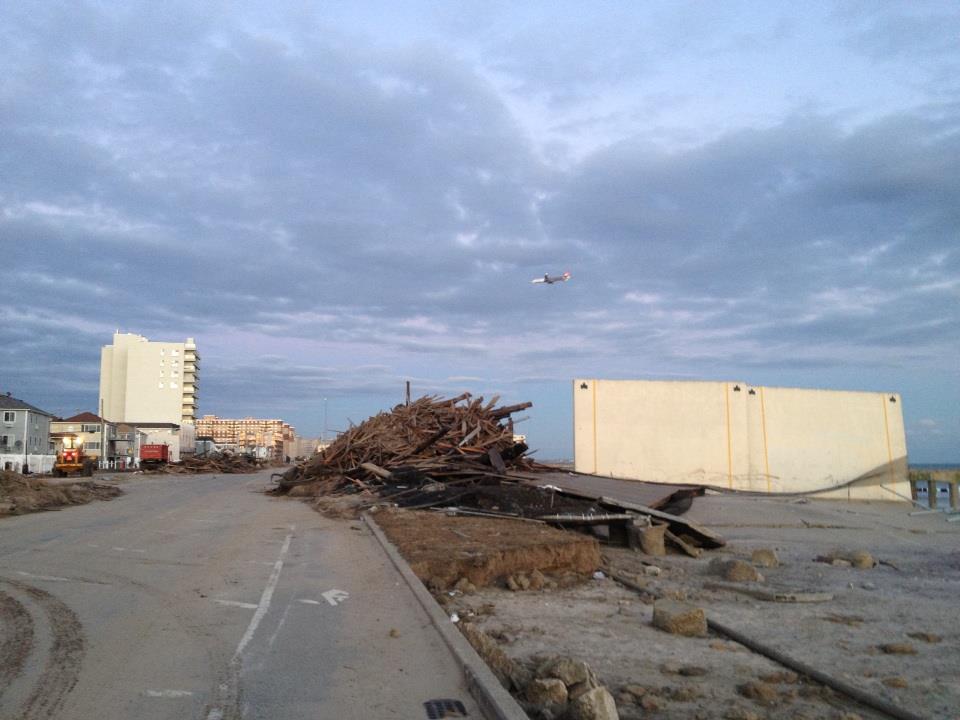 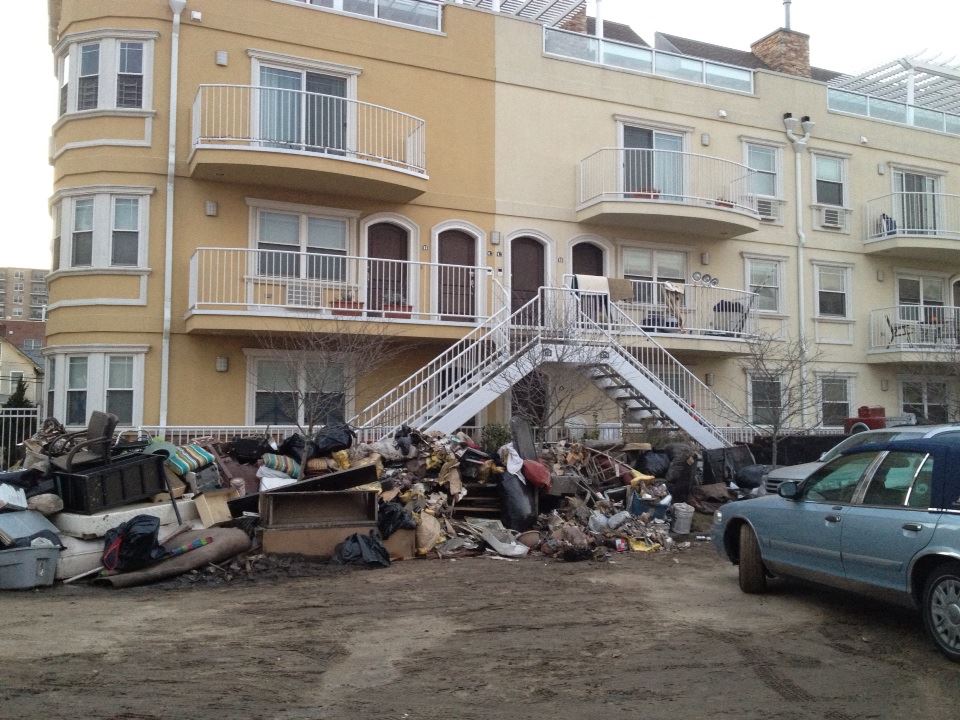 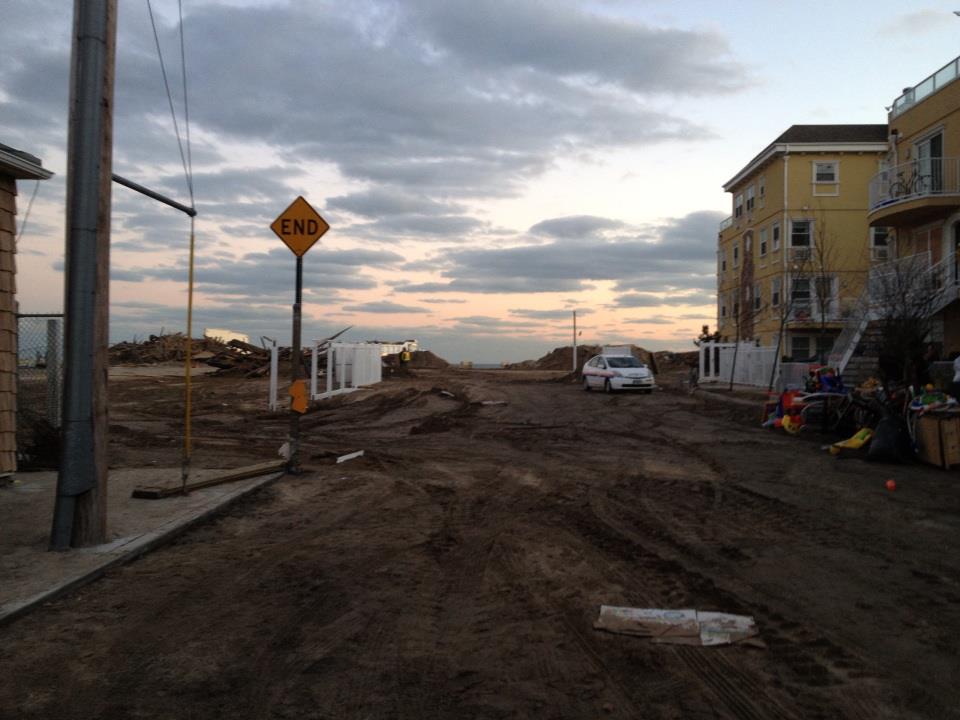 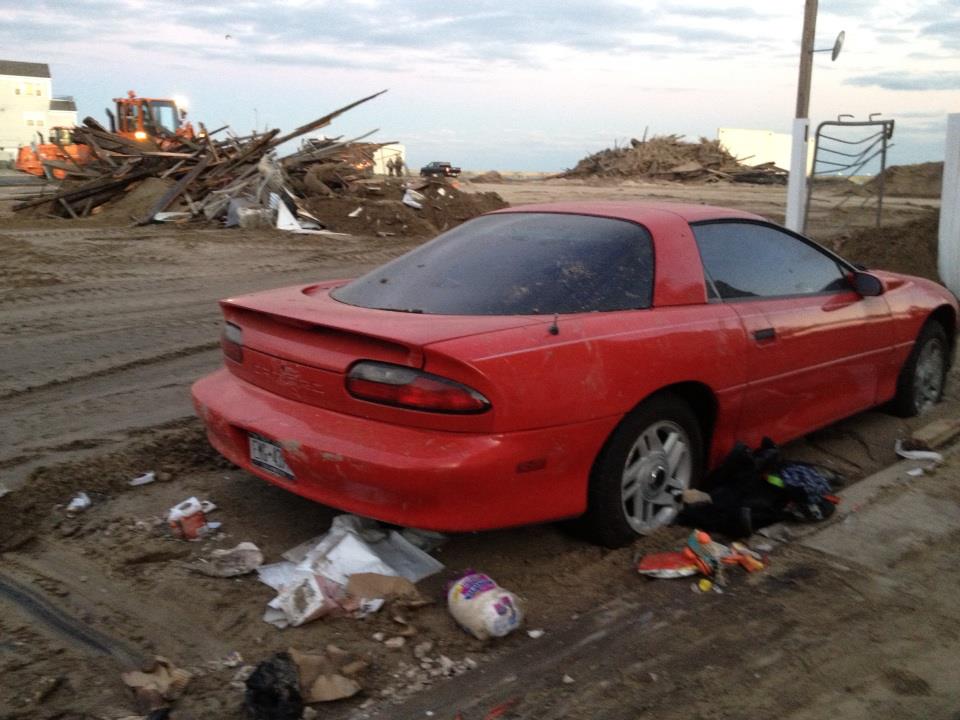 Car Ruined after Hurricane Sandy in the Rockaways. 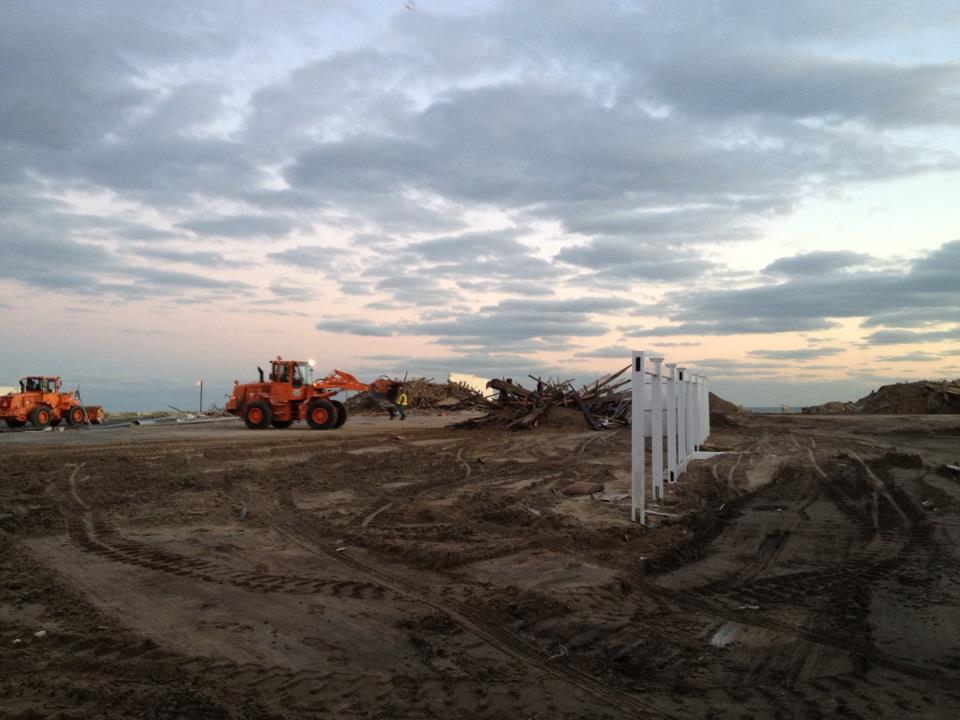 Cleanup after Hurricane Sandy in the Rockaways. 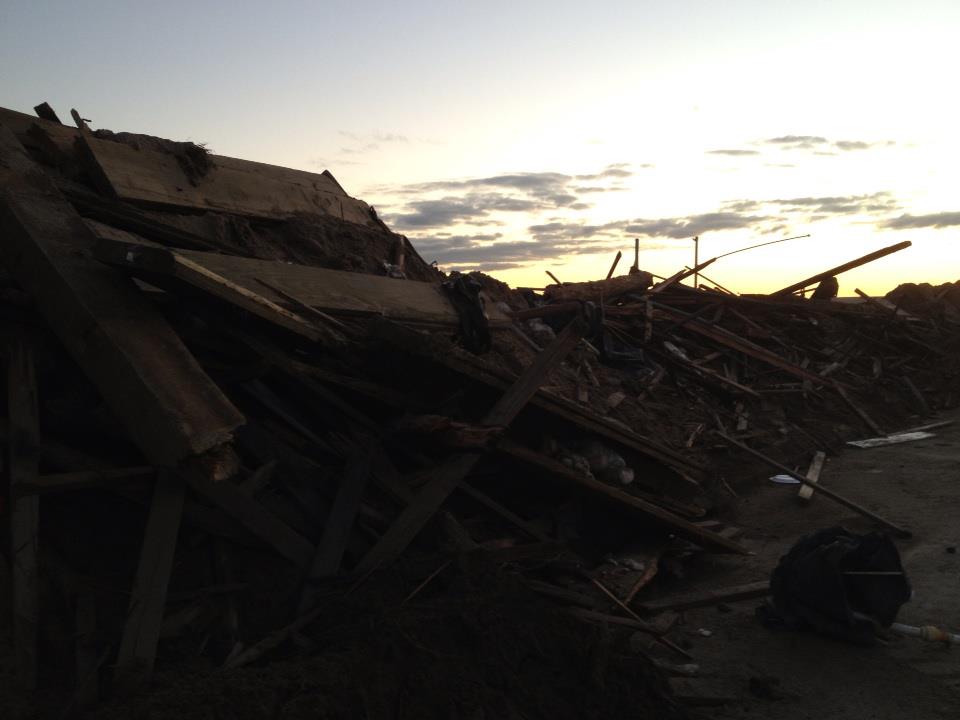 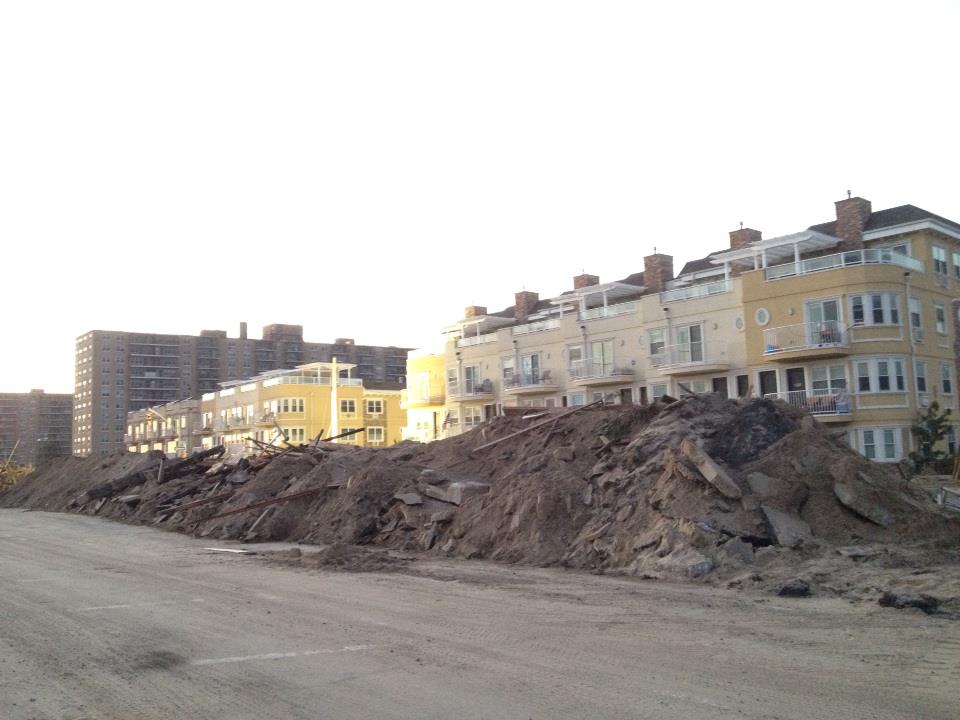 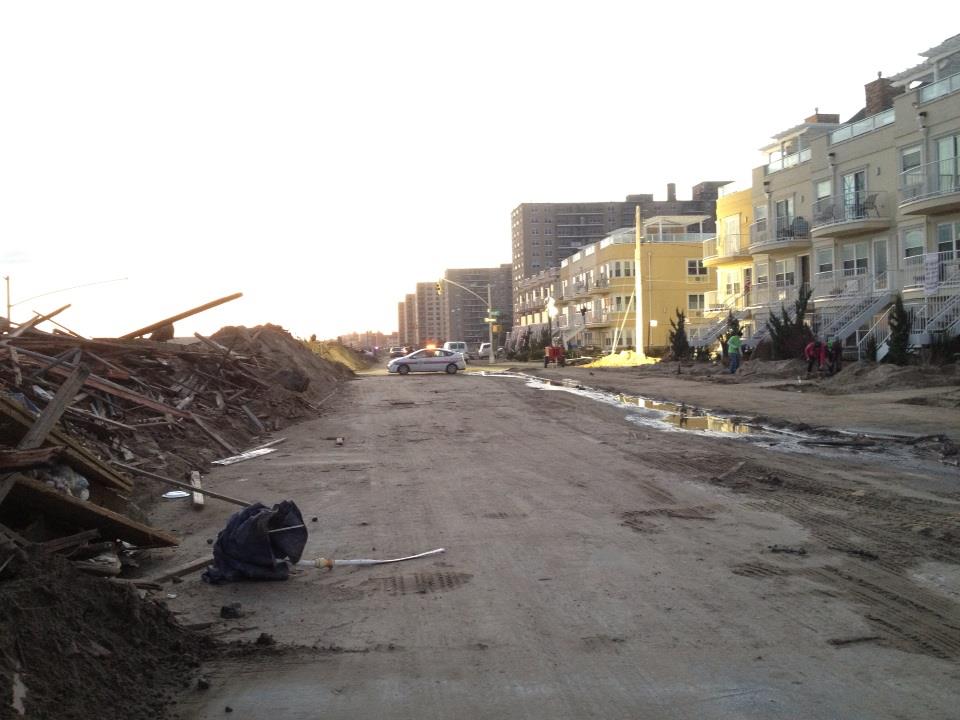 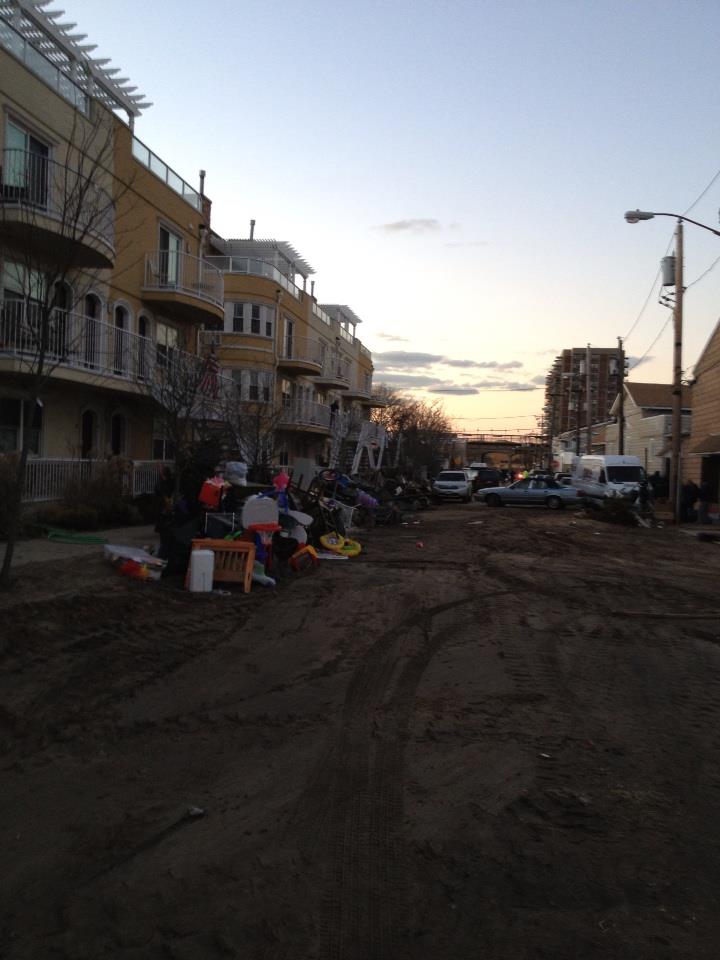 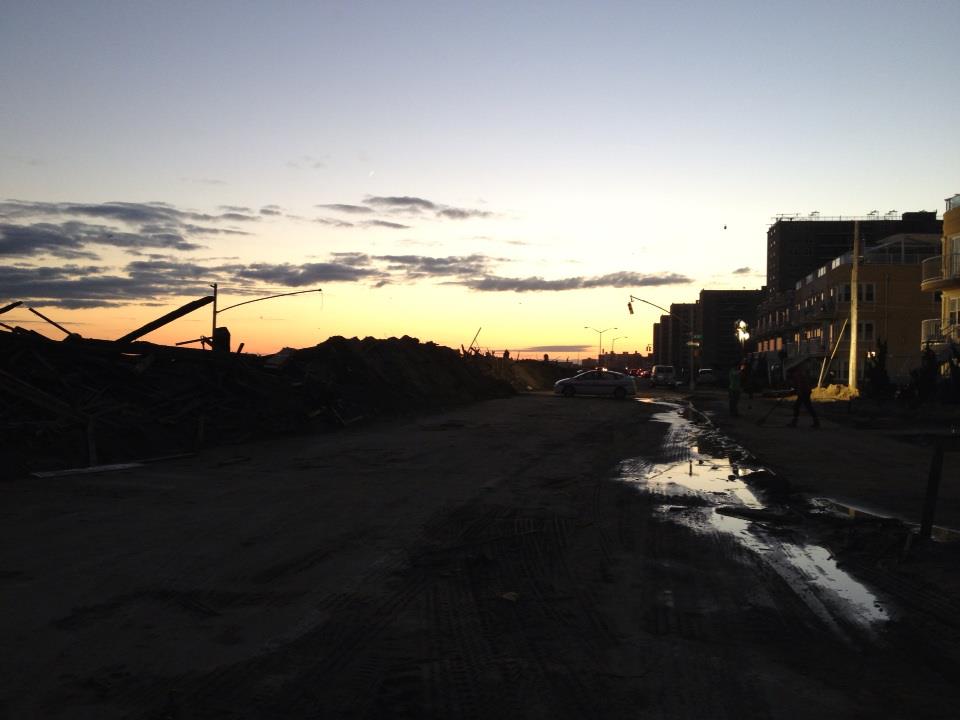 We volunteered in the Rockaways, helping to hand out food and supplies donated to hurricane victims. 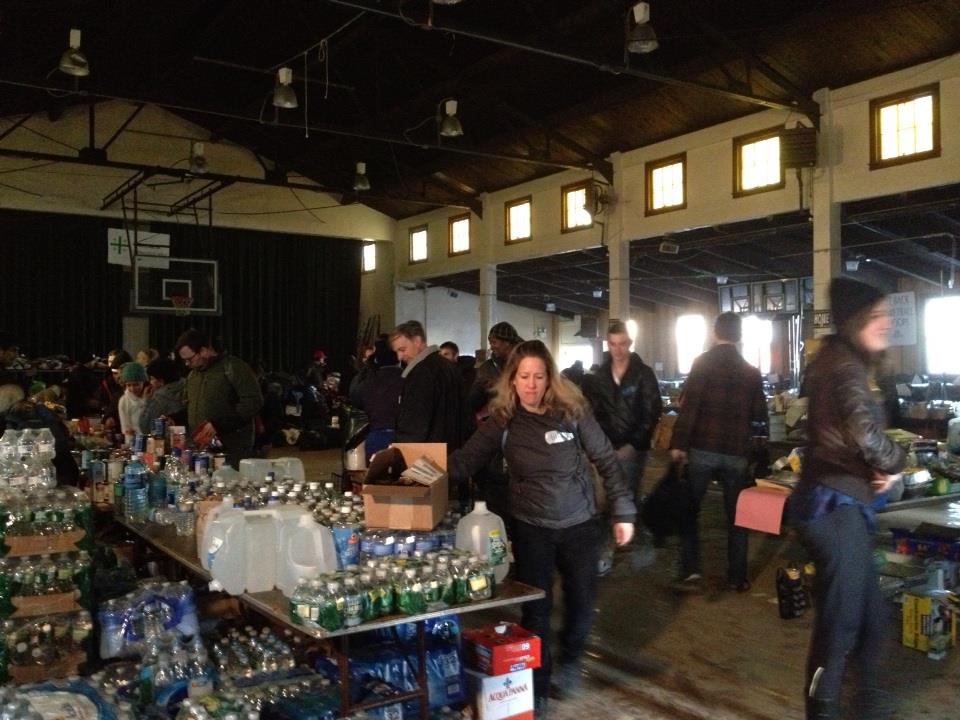 The church gym that we were working in had a floor covered in sand, no electricity and no heat. We had an abundant supply of clothes, so if you are looking to donate to relief efforts, stick to cleaning supplies–including shovels, food and heating devices that don’t require electricity. If you are feeling extra generous, give a generator! 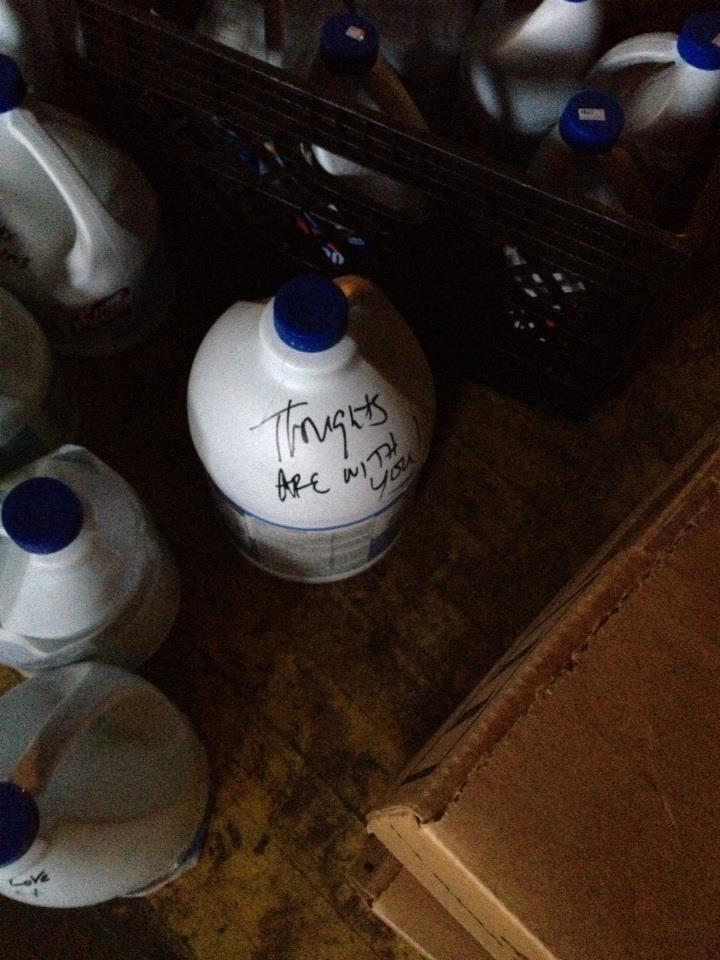 Bleach with a message of love.

Though there were National Guardsmen on the ground, 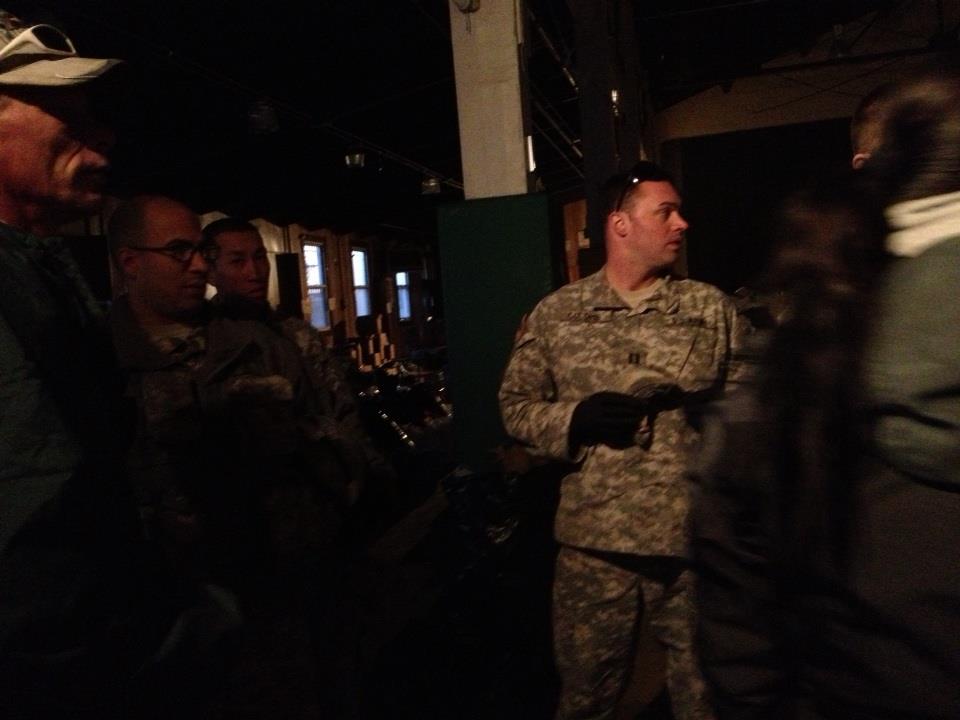 the overwhelming proportion of relief work seemed like it was being done by volunteers from Occupy Sandy or other independent organizations. Individuals who were food vendors brought their trucks out to Broad Channel and to the Rockaways to serve the community hot food.

Not only do the people of the Rockaways (and many other parts of New York City) still lack electricity, but last night New York City experienced a snow storm. In addition, for those who have been following our twitter account, you probably know that the gas situation in New York City is dire. Most stations in the city aren’t pumping gas, and the ones that are charge an arm and a leg and make you wait for hours (if you are lucky).

Yesterday we waited on line in the snow for two hours 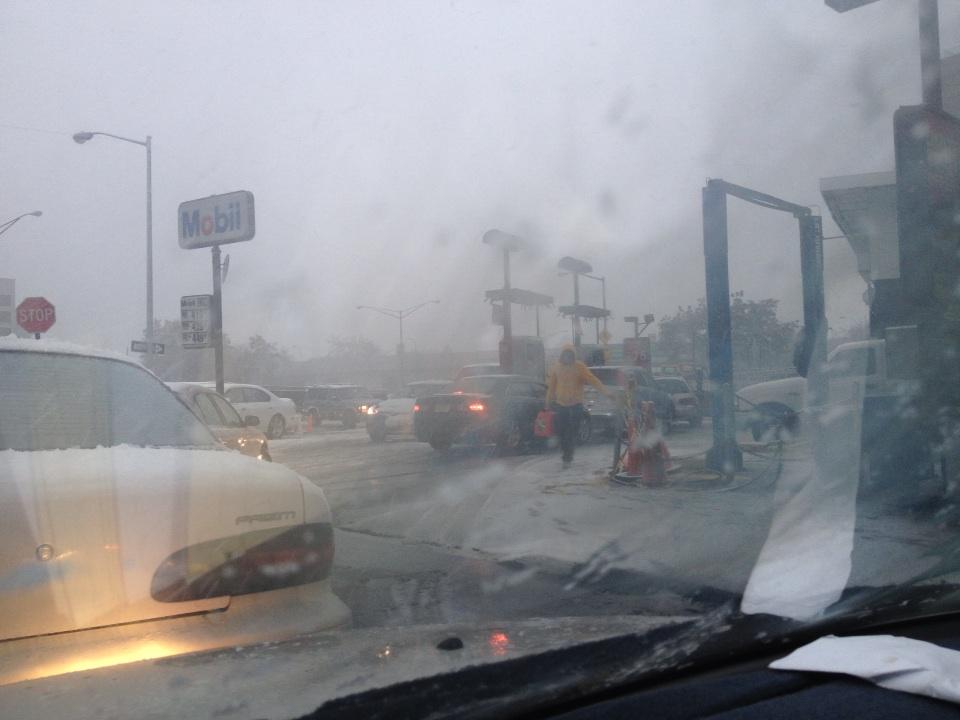 Finally at the front of the gas line! What better feeling is there?

(during which time we turned the car into a beauty salon, observe my nails (Milani Gems). 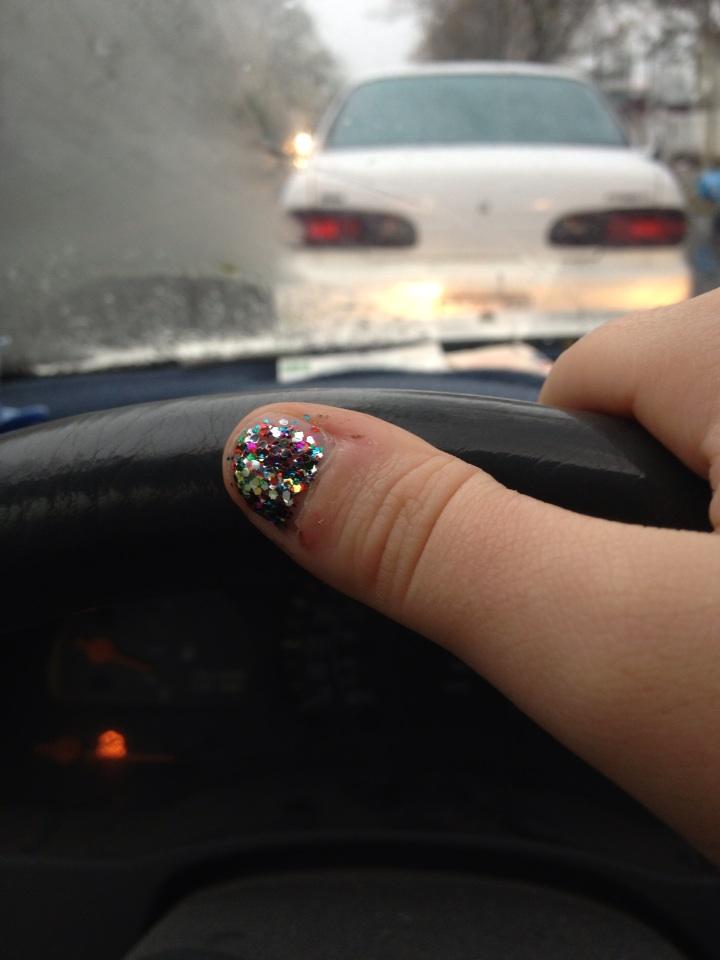 So, to make a long story short, if you have any extra time or money and want to help with hurricane assistance, visit Occupy Sandy to see locations that you can go to, or buy Occupy Sandy some lovely wedding gifts on Amazon.com.

← Slut Shaming Claims Another Life: RIP Felicia Garcia
The Trope of the “Bad Mom” Re: ‘I am Adam Lanza’s Mother’ →