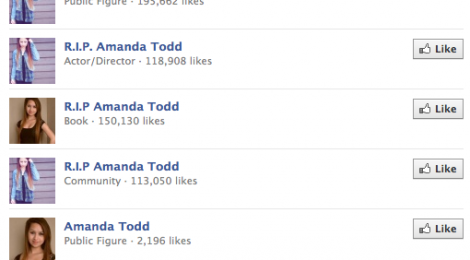 Since publishing our initial post on Amanda Todd, our site’s traffic has increased about 1,000 percent, the number one search term being: “Amanda Todd Flash.” Really people?!

While we are thrilled to have the traffic, it brings up some really deep philosophical questions about both human nature and the nature of the Internet.

Fake Pretty has essentially become popular on the back of a dead girl. Amanda Todd killed herself after she was stalked and made fun of on the Internet, then tried to reach out to others through the Internet for solace shortly before her suicide. And in death, Amanda Todd has become a meme, figment of the Internet’s imagination, a phenomenon usually reserved for cute photos of cats with bread on their faces or auto-tuned children. In death, the Internet tried to fight for Amanda; the Hacker group known as “Anonymous” released the alleged name of Todd’s initial tormentor so that vigilante justice could be exacted.

On YouTube, people are posting videos of Amanda Todd singing in their feeds so that visitors will click on their streams. Numerous “Amanda Todd” Facebook accounts have appeared and garnered millions of “likes” in her name.

On Twitter, another teenager named Amanda Todd is flummoxed at her new-found popularity. In the midst of defending her identity and vitality, she asks: 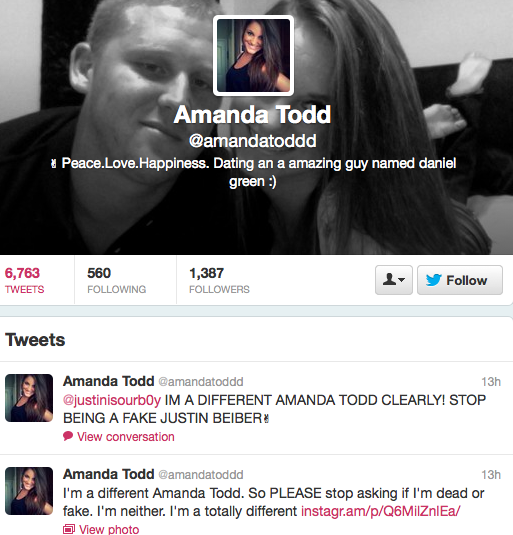 Todd has become such a phenomenon that people are wondering if the story is a hoax. Her tale has become, in a word, unreal or symbolic. Parents may tell it to children as a warning: don’t share pictures on the Internet with strangers or this could happen to you! Teenage girls may see it as an essay on the dangers of female promiscuity, curious people just want to see photos.

Watching Amanda Todd’s YouTube videos, she sort of becomes unreal–as if her channel, “TheSomebodyToKnow,” is some newfangled “Blair Witch Project” promo. How could a girl who was this public about her pain (someone who had already attempted suicide once)– how could this girl be so ignored and then so noticed? Who is Amanda Todd? Who was Amanda Todd?

When is the movie coming out?

Perhaps our attempts to fictionalize her or claim ownership of her story stem from disbelief that someone could have cried out in pain so publicly and not have been heard. Or, perhaps as Vancouver Sun’s Pete McMartin writes, our fascination stems from our ability to

”… watch a tortured young girl foreshadow her death on the very thing that caused her so much grief. How many of the millions of viewers of Amanda’s video saw the awful irony in that, that the virtual world had become both her outlet and her prison?”

But I can’t help feeling that her video illustrated not only her torment, but contained in it the seed of our own sickness, our own outlet and prison.”

We look at her videos to try and make meaning of a world in which this could happen. Some of us turn into philosophers or youth advocates, others turn into jokers or slut shamers, still more coast apathetically on the crest of Todd’s Internet wave until it too crashes upon the shore.