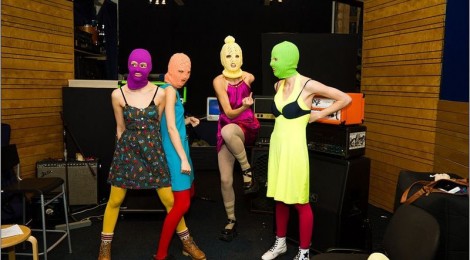 Insane Clown Pussy Posse Riot: What @ICP and #PussyRiot have in Common

Three female rockers from the band Pussy Riot have been sentenced to two years in a Russian prison after performing their song, “Punk Prayer” inside a Russian Orthodox Church, clad in brightly colored ski masks. In the song, the band asks the Virgin Mary to drive out Vladimir Putin. The song also criticizes the country for its lack of support for gay rights and women’s liberation.

In the United States, where we pride ourselves in our freedom of speech and freedom to assemble, we have seen an outpouring of support for the Russian rockers, who, it is assumed, clearly lack the freedoms that people in our country enjoy. Madonna thanks her lucky star(s) that she is able to take the stage and say what she wants, while Patti Smith and the Red Hot Chili Peppers sing a back up chorus of ‘shame on Russia.’

I attended a reading at New York City’s Ace Hotel in support of the jailed Russian band, featuring performers including Justin Vivian Bond, Chloe Sevigny, Eileen Myles and many others. It was a full house, and listening to the words of Pussy Riot band members Nadezhda Tolokonnikova, Yekaterina Samutsevich and Maria Alyokhina was truly moving. These women were smart, educated and articulate. There were so many zings, I stopped counting. It is no wonder that so many intelligent and recognized people have chosen to align themselves with the band.

As I was coasting home on a Pussy Riot/freedom of speech high, feeling so fortunate to be an American, I happened to turn on the radio and hear a conversation about the band Insane Clown Posse, who, I will assure you, are not regulars on NPR. The band’s fans, known as juggalos have been classified as a gang and now the band is suing.

According to Village Voice writer Camille Dodero, the gathering of the juggalos held each year in Illinois was visited this year by Homeland Security. Band members Violent J and Shaggy 2 Dope are planning to file a class action lawsuit against the government based upon testimony provided by various juggalos who claim to have been discriminated against for their fandom. In addition, the band’s revenues have suffered as stores including Hot Topic are refusing to sell Insane Clown Posse merchandise since it is now gang memorabilia.

Dodero argued that designating the juggalos as a gang had turned a group of self-confessed outcasts into outlaws and targets for law enforcement; worse yet, band members Joe Bruce and Joey Utsler are now kingpins.

It’s true that ICP fans are not known for their good behavior. Juggalos pelted reality star Tila Tequilla with objects and sprayed Faygo (their beverage of choice) as she tried to perform topless for them several years ago. But apparently, a group affiliated with Pussy Riot set fire to a police car according to the New York Times; on charges of “hooliganism” both groups compete. Still, you don’t see the literati or actors or Madonna coming to the defense of ICP fans.

Journalists describe the juggalos as a family of poor, rural, uneducated and downtrodden individuals–they are people who don’t have friends in high places, people who listen to songs with lyrics like: “F*cking magnets: how do they work?” Still, ICP’s music is not nearly as violent or disturbing as most of what is on mainstream radio. Their rhymes would best be described as childish or immature. Since finding mainstream success, Violent J is admittedly cheerful and Shaggy 2 Dope is happy with his life as well.

Juggalos should not be classified as a gang any more than Pussy Riot should be in prison. While it is initially easier to sympathize with the plight of feminists in colorful outfits than it is to soldier on with middle aged men in clown facepaint, when it comes to freedom of speech and the right to assemble, these guys need our support just as much as their international feminist counterparts, especially since this inquisition is happening right in our own backyard. Are we any better than Russia?

So, I propose a hybrid movement of juggalos and feminists: we can call ourselves: Insane Clown Pussy or Insane Pussy Clown Riot or Insane Riot Pussy Clown– the possibilities are endless.

We can don clown balaclavas (ski masks) and pay tribute to freedom of speech and freedom to assemble, each in our own special way. Because as much as I hate to admit it, I am Insane Clown Pussy– we all are. 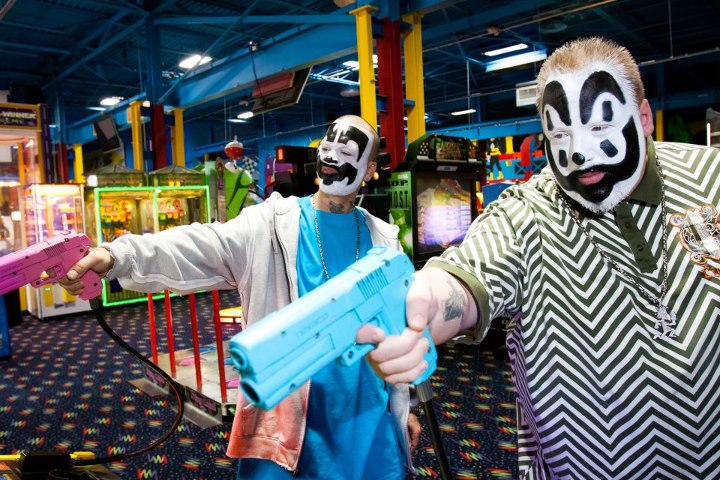 Pussy Riot performing their infamous song “Punk Prayer,” for which they are currently serving prison time.

← Ginuwine has one and so does every person in Korea*
What to wear to the Insane Clown Pussy Riot? Ski masks (balaclavas) that inspire and confound →