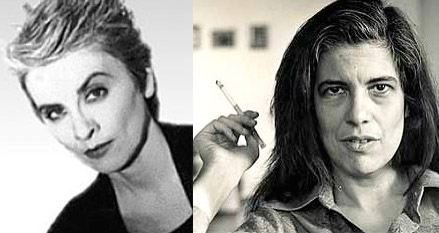 This is THE best video on the Internet. It is surreal, it is filled with attitude and if you listen closely, starting at 2:36 you will here the fastest off the cuff utterance of the phrase “since I’m so smart” that has ever been recorded. I do not view the video as part of any legitimate conversation, but as an art piece unto itself, a song that has yet to be written.

Excuse me are we not speaking English…listen I don’t read Entertainment Weekly why don’t you ask me a direct question, excuse me.”

CAMILLE PAGLIA: Sontag is Sontag is gone she I mean I’m so happy she came out of hiding I have been talking about Sontag sinceimsosmart from my rise to fame for the last three years right no one is interested.

For further artistic reflection, see the official youtube transcript below, a truly artistic and further non-sensical rendition of a non-sensical conversation. “Isn’t wind in my memory”? “I’m like one of a series of vacuum and carpet you wanted”

The transcript even suggests bringing out a turntable, which is much needed for this particular video clip.

0:00
wanna digress for a moment to take note of another famous writer whose name
0:03
isn’t wind in my memory now with yours for ever
0:06
you may recognize the woman that we interviewed last fall when I asked susan
0:10
turntable was
0:11
had she really said it and it hit Weekly reported who
0:14
is Camille Paglia did I really say it you mean do I really set
0:19
course I did say it what why
0:22
I want a way that ask me did I really say something that
0:27
your entertainment weekly report yes I really did say
0:30
meaning what I mean I’m sorry excuse me
0:34
the are we not speaking on it have you not heard about her or not whether or
0:38
not
0:38
router I’m think if I say who is Camille Paglia
0:42
no I didn’t say that those ivory Entertainment Weekly why did you ask
0:46
direct questions
0:47
excuse me the a.m. and you really not
0:51
Ritter or reckoned with until it comes about two and a half weeks ago I had
0:56
never heard of coming up I’ll
0:57
that is correct I was astonished date older because
1:00
Polya and Shawntae had written on so many at the same subject from feminism
1:06
to Italian Catholic paganism well I would know that
1:09
what I you’d be surprised at all the things I don’t know because I’m
1:14
I know about a lot of other things and I read all the time
1:17
and I don’t think I’m wasting my time and what I do read so
1:21
one carried everything I see her debut
1:27
of course you have people mention me to her for years now that but you can’t
1:30
continue to clinch the bill amending act at when she been your living
1:33
New York in my book in a bestseller in New York for like years I’m
1:36
you know et cetera et cetera is a massive denial out there
1:40
have you studied I what’s that all about well I think that
1:43
its as in on the turning point with Anne Bancroft I mean this is she literally is
1:47
being passed away by
1:48
younger rival and in she’s not haley i’m afraid very graceful a
1:51
arm but on you know Suntech
1:55
was an enormous to get was in the sixties and on
1:58
its shoe unfortunate what she did you miss out lecturing career there’s a
2:01
general collapse
2:02
in the seventies like you know it’s too bad because she was once a profit
2:06
of our popular culture and then in something became very snobbish
2:09
I and in the interest after all these male European rightists on she lost
2:14
the cultural control that she had I am something in the nineties there’s no
2:17
doubt and
2:17
I’m like one of a series of vacuum and carpet you wanted to Dorothy
2:21
up Parker and so on and I think that I something belongs to a generation before
2:25
will work till she doesn’t watch TV
2:26
she’s not into rock and she has been %uh past she went on about it
2:30
with problems like this you found it impossible after shooting the republican
2:33
convention tote and she said no but I read the text
2:35
how she is a lot of it I’ll biggest gone Jimmy
2:38
I’m so happy she came up honey I’ll be talking about some taxes as much my rise
2:42
to fame for the last three years right
2:44
no one was adjusted okay something amiss when entering into new york about
2:47
Mandarin to suddenly such a favor by coming out with us now what she came out
2:51
everyone remembers the AuthenTec you see they remember her as being beautiful
2:54
as being interesting and suddenly they’re really saw her okay for the
2:57
first time they realize she’s Dahl
2:59
okay she’s born she saw lipstick she knows nothing about about contemporary
3:02
life she’s not a very good writer any longer
3:04
that I in even this new knowledge has become the toast the bourgeoisie
3:08
she’s no longer even at what car to buy should have had tremendous favor 1992
3:12
was a wonderful year for me because she came out of hiding
3:14
as recruitment of hiding and suddenly people realize just how interesting I am
3:18
but you know
Tags: camille paglia, susan sontag

← Apathy and Potato Salad: Zack Danger Brown and his Kickstarter idea
How Many LGBT on TV? →