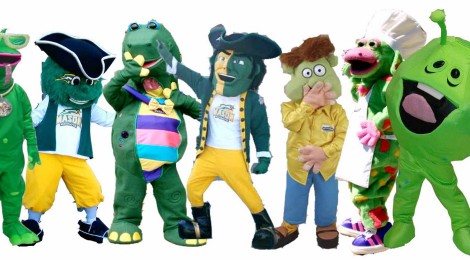 So your bae likes b-ball or: March Madness for the non sports fan aka March Mascot Madness top 10

Hello hi and what’s up. It’s been a while. Gonna get back into the writing groove, teaching y’all and yinz and youse guys some things I learned whilst not writing on this here blog.

There is a thing called basketball, and some people like watching it–especially people in the Midwestern regions of the United States. This month, something called “March Madness” is happening, and there is a thing called “bracketology” that people do. It sounds like Scientology, and has some of the same creepy religious trappings. It involves filling out a flo chart, counting thetans and betting on which final four college teams will be in the playoffs. Beer and money is exchanged, and if you are me, also dirty looks. But when your bae likes b-ball, you have to find a way to b supportive, right?

I first learned about “March Madness” when taking a bus from New York to Minneapolis. Twas during the ides of March and I recall encountering some elated kids in face paint. I asked them what the f was up and they said: “duh we just won! MARCH MADNESS! WOoooooo!

We were in a McDonalds in Edina, Wisconsin, if that’s even a place. I got a bacon cheeseburger and went on with my life. Years later, the madness has returned to me, and since today is the start of all the insanity, I need to find a way to fit in and support the basketball-y inclined ones in my life.

So… for the non-fans among us I present: MARCH MASCOT MADNESS! Now you too can join in on the anger and sports-related rage that rises in March, even if you haven’t the faintest clue or care about what’s going on court side.

Wichita State has this guy, he’s supposed to be a bundle of wheat, but looks more like Frankenstein on a sick day. He goes by the name “WuShock” and we would be WuShocked if he didn’t make it into the final four. His facial furrows indicate that he’s seen some stuff go down.

6)Oklahoma State has this work of art representing their team, the Cowboys. Pistol Pete doesn’t look particularly uplifting, but people cheer, hoping to lift his spirits and help him forget his years of drinking and the wife who left him for a younger happier man.

5) Ohio State’s mascot needs much explanation. Is he a doughnut hole? A combo? A prison inmate? Something sexual? Nope, he is Brutus Buckeye! Buckeyes are this kind of candy, also a tree, also what people from Ohio call themselves #whoknew?

Peanut butter and chocolate candy made to resemble the nut of a buckeye tree.

4) Praise the lord! The Providence Friar is here, and we are very afraid of his wrath. It’s hard to know what to even say about this “mascot” without being disrespectful to an entire religion, so just take a look and be wowed.

3) Wow we are already at number three…my how time flies, like the flying nun above. Louisiana-Lafayette presents a sunburned carrot to cheer on its team, the Ragin’ Cajuns. This guy (or butch woman?) is supposed to be a hot pepper, not a California Raisin on a good hair day. He has a slightly evil glint in his eyes, like some villain that didn’t quite make it into that movie Avatar.

2) This winning mascot is the absolute crème de la crème of sports mascots, and obviously it comes from Stanford University! What is it, you may ask? Is it Fraggle Rock? A garbage heap? A tornado? A marijuana bush? Nope. It’s a tree, the logical representative for the team named Cardinal. It’s hard to say what is most disturbing about this mascot, from its drunken eyes to its shoddy construction, this mascot’s goal is clearly to distract the other team and to that end, it is clearly doing a wonderful job.

The winning mascot, this lumberjack, is the one that truly makes us March mad. Aside from the fact that this month of madness–and sports in general—is focused primarily on men’s teams, this mascot’s primary feature (aside from his queer-friendly mullet), is his ability to bench (im)press ladies. Stephen F. Austin Lumberjacks, we are #Notimpressed

While we appreciate the Brawny paper towel aesthetic as much as the next person, we can’t help but wish this guy were more of a helpful Mr. Clean type and less of an expert in the sport of woman lifting. Still, it’s nice to be able to share in the March Madness, so thank you Mr. Lumberjack.

← LGBT TV: What Queer representation means to me
Apathy and Potato Salad: Zack Danger Brown and his Kickstarter idea →