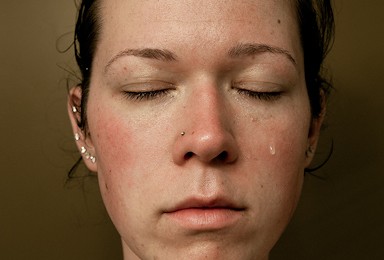 Welcome to America, where most of us are fat and we hate fat people. Many of us live our lives in fear of being fat or “feeling fat”– as if fat were an emotional state; “looking fat”–as if obesity were a camera trick, or simply owning up to the fact that we are in fact overweight. Then we spend time and money either trying to get thinner or looking for more flattering clothes. Feeling bad about ourselves is practically an American pastime.

This is why when NPR decided to feature artist Julia Kozerski’s weight loss photos, “Changing Room,” as part of “The Picture Show”- a feature on their blog aimed at showcasing photographers, we were a bit skeptical.

With fat showing up in our Facebook feeds in the form of this video where a news anchor attacks her critics, and after reading the esteemed Lindy West’s take on obesity and her takedown of Dan Savage (and his rebuttal), it may seem that there is little to add to an already big conversation.

Films like the horrendous “Shallow Hal,”  wherein a man starts to see women for their inner beauty (manifested of course in the form of thin and blonde Gwyneth Paltrow) epitomize the national psyche as far as beauty is concerned.

In many ways, the photographs of Kozerski that NPR chose to showcase just reyify the American weight loss story. Her interview with NPR largely focuses on her weight loss rather than her artistic practice. Through NPR’s populist lens, Kozerski’s appears to be the tale of an exceptional fat person who manages to live up to her full potential as evidenced by her eventual thinness. While the weight loss itself is exceptional — the pictures show a woman loosing a tremendous amount of weight (160 pounds) over the period of a year–the interviewer sums up her weight loss as if it was relatively simple:

As for how she lost the weight? She stopped eating junk food, started walking and biking daily, counted calories, and weighed and measured her food portions. (You can see a BodyBugg armband in many of the photos.)

The first, and possibly most influential photo is in the series NPR chose to display is of  the overweight Kozerski in her wedding dress. The narrative that can be inserted here is that a man has agreed to marry this overweight woman, so then she proceeds to lose a ton of weight- perhaps rewarding him for his faith in her as a fat person. Upon looking at the complete body of work on Kozerski’s website it is apparent that the photographic series “Changing Room” is by far the least visually interesting or emotionally powerful of her otherwise significant collection. NPR also curiously chose to exclude photos of Kozerski crying which are also part of the “Changing Room” series–visually homogenizing and streamlining the weight loss process.

Kozerski’s other series “Half” shows her naked post weight loss, her skin hanging off her loosely in a photo titled “Ruins.” In another photo, she is in bed naked with her average sized boyfriend and she is crying. In these photos we understand weight loss as what is actually is: a loss. 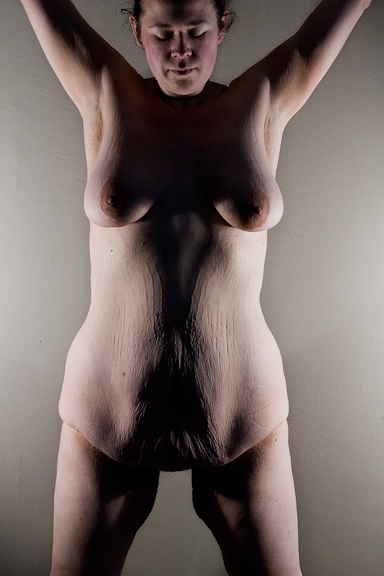 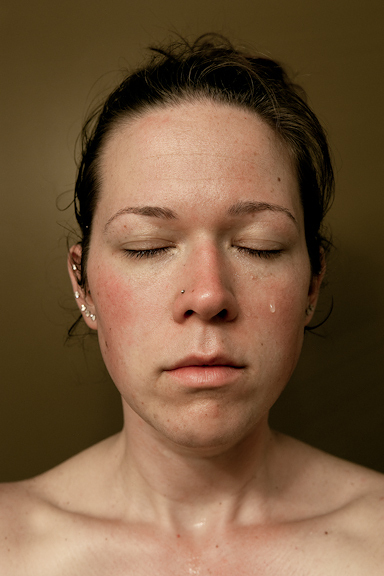 Kozerski: “Even though these images were taken years ago, when I look back at them, I become extremely emotional. I can still remember the experience presented in each image. I recall the thrills of trying on smaller sizes and the satisfaction of feeling more attractive, even sexy. More so, I remember the devastation of not recognizing the person reflected back to me in the mirror.”

When a person is forced to identify with a marginalized or belittled group of people–our nation’s obese–and becomes part of a new liberated social group, it is only natural that feelings of guilt may ensue. Dressed in a variety of clothes in her “Changing Room” photos, Kozerski presents as an average bodied individual, but upon seeing her naked with her husband, we realize she has a different story than most people who wear her jeans. In a photo entitled “Absolution,” she is looking up and crying. One wonders what she is absolved of; Is it the burden of obesity, or is it the sin of forsaking her previous identity? In these photos, we see that in our society, having a relationship with fat is having a relationship with pain. Fat IS a feeling.